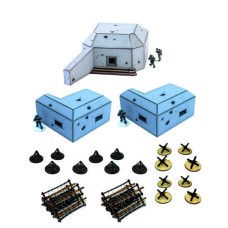 The formidable Atlantikwall was built by the Wehrmacht to guard the French coastline from invasion by the Allied Powers. This bundle comes with enough fortifications and barricades to build a small Widerstandnest (resistance nest/strongpoint).