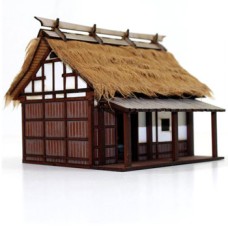 28S-EDO-105 this is a “28Standard” 4Ground model with high detail and pre-painted parts.

This is a home to a Komae family of smallholders. This lowland Minka (vernacular built) dwelling is made from Kyoro-Gumi wooden post-framing, with both partial plastered bamboo panels and timber boarded panels. Internally there is the lower 'Doma' of Doza (padded earth) where many household jobs are done and beside that the 'Hiroma' of 'Taka-Yuka' raised timber flooring, where the family eat and sleep. Outside above the Hi-en Engawa (full length veranda) is a Naga-ita (wood planking) roof.  The dwelling has a Buki (thatched) Kirizuma roof, the mune-jimai (ridge cover) is the relatively common Oki-chi.

Komae were of the Hyakushou (Peasant Farmers), but what land they had was rented from their superiors the Honbyakushō (literally-First Farmers).

Komae laboured for their Honbyakushō as well as on their own rented smallholding, but still their lives were better then Mizunomi who laboured for others without any land of their own.

Komae only paid partial taxes (in produce) and another form of tribute called Yaku (Service). The Mizunomi and Komae were those most employed in this community work.  The burden of Yaku was most heavy for those villages closest to post roads who had to porter for travellers.  Way stations would always have local peasants on hand as porters and bearers. They would carry loads to the next way station and then often have to wait to take a load back the way they came before the could go home.

Komae also had to fight as Ashigaru when called upon for their feudal lord.  After a campaign a few of the most able would opt for a life as a permanent garrison soldier and these professional castle Ashigaru could even rise to the rank of Gunsou (Sergeant), becoming Honbyakushō by doing so.