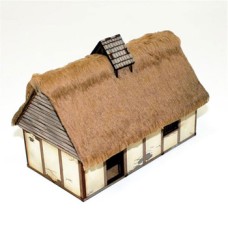 28S-DAR-103 this is a 28Standard 4Ground model with high detail and pre-painted parts.

The burghs (walled towns) of Danelaw England would have been full of dwellings such as this one, though even in the Late Middle Ages lots of common folk would still have lived in such simple dwellings.

With this highly detailed laser etched parts and the usual abundance of 4Ground add-ons - this is a fantastic kit. Included are the doors, window frames, central fire pit and even a smoke hood to cover the smoke hole from the rain. The thatch roofing is also included.

This laser cut kit is supplied pre-painted with 4Ground base paints.
paints.